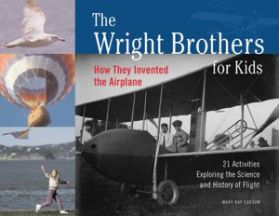 The Wright Brothers for Kids: How They Invented the Airplane. 21 Activities Exploring the Science and History of Flight by Mary Kay Carson.  Homeschool subjects covered: Science, Inventions and Inventors, United States history.

The Wright Brothers for Kids provides a unique approach for your homeschool student to study history:  by actually doing it.  If you are studying inventors and inventions or famous Americans, why not actually tie your science in by actually having them do some of the same experiments the Wright brothers did?  It's a brilliant idea!

This book not only provides the biography of the Wright brothers, as well as the history of flight, but it also gives step by step instructions for more than 20 activities (including building a rubberband - propelled plane).

"This activity book tells the amazing true story of how two bicycle-making brothers from Ohio, with no more than high-school educations, accomplished a feat that forever changed the world. At a time when most people still hadn't ridden in an automobile, Wilbur and Orville Wright built the first powered, heavier-than-air flying machine. Woven throughout the heartwarming story of the two brothers are activities that highlight their ingenuity and problem-solving abilities as they overcame many obstacles to achieve controlled flight. The four forces of flight--lift, thrust, gravity, and drag--and how the Wright brothers mastered them are explained in clear, simple text. Activities include making a Chinese flying top, building a kite, bird watching, and designing a paper glider, and culminate with an activity in which readers build a rubber-band-powered flyer. Included are photographs just released from the Wright brothers' personal collection, along with diagrams and illustrations. The history of human flight and its pioneers, a time line, and a complete resource section for students are also provided."