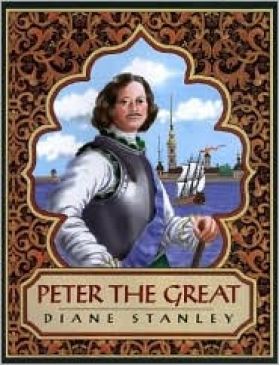 Peter the Great, crowned tsar of Russia at the age of ten, believed that whatever he wanted he should have -- and the sooner the better. What he wanted most was to bring his beloved country into the modem world. He traveled to the West to learn European ways -- the first tsar ever to leave Russia -- disguised as a common soldier.

He explored the West with excitement and curiosity and returned home ready to undertake a series of momentous social reforms. And to satisfy his boyhood dream of a Russian naval port, he began to build, on a freezing swamp, a glittering new capital to be named St. Petersburg.

In this welcome reissue of Diane Stanley's acclaimed picturebook biography, her meticulously researched text and sumptuous illustrations capture the fabulous world of seventeenth -- and eighteenth-century tsarist Russia and the greatness of its larger-than-life leader -- a man of huge stature and tremendous spirit whose impatience and vision, insatiable curiosity and boundless energy transformed half a continent.

Peter the Great is recommended reading in Tapestry of Grace, Illuminations, and Sonlight.