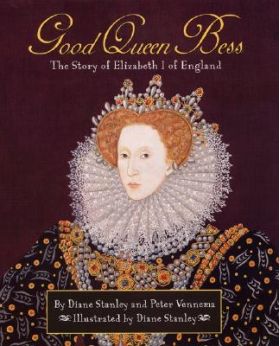 She was a queen whose strong will, shrewd diplomacy, religious tolerance and great love for her subjects won the hearts of her people and the admiration of her enemies.

Elizabeth was born into an age of religious strife, in which plots and factions were everywhere and private beliefs could be punished by death. When she became queen, her counselors urged her to marry quickly and turn the responsibilities of governing over to her husband, But she outwitted them by stalling, changing her mind; and playing one side against another, as she steered her country to the glorious era of peace and security that would be called the Elizabethan Age.

Elizabeth's forceful personality, colorful court, and devoted subjects come vividly to life in this stellar picture-book biography. When it was first published, "Good Queen Bess" was named a Notable Book in the Field of Social Studies, an American Library Association Notable Book, a "Booklist" Editors' Choice, an "American Bookseller" Pick of the Lists, a "Boston Globe-Horn Book" Honor Book, and an IRA Teachers' Choice.

In this welcome reissue, celebrated author and illustrator Diane Stanley and her husband, Peter Vennema, paint an impressive portrait of the remarkable queen who loved her people so dearly and ruled them so well.

This book is recommended reading in Sonlight and Illuminations.