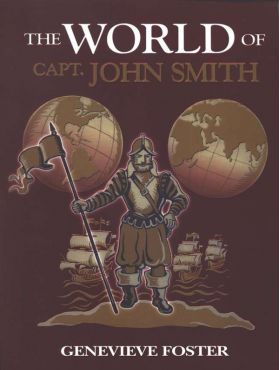 The World of Captain John Smith

If you've never read a Genevieve Foster book, then you're in for a treat. Foster has this unique approach of teaching history horizontally - not just focusing on one character in one location, but looking at all the events and characters of a particular time period all over the world, and examining how they are all interconnected. So, when studying Captain John Smith, Foster weaves a story of the world around her central character; including stories of scientific discovery and invention, music, literature, art, and religion. She has a for telling stories that will especially delight and amuse her youthful audience. Spanning the years from 1580-1631 the life of the adventurous John Smith gives a picture of the world just before and during the colonization of America. When Smith was a boy, Shakespeare was on his way to London to become an actor, the Spanish Armada had failed to conquer England, Mary Queen of Scots had lost her head, and Akbar the young prince of India sought to rule his people wisely. Galileo was perfecting his telescope and seeing things never before seen by the human eye, while Pocahontas romped the forests of Virginia and saved a young Englishman's life. A little band of Pilgrims seeking to escape religious persecution in England fled to Holland and a little Dutch boy named Rembrandt began to paint. These are just a few of the intriguing personalities, events, discoveries, and advances that made up the world of Captain John Smith and are now made alive to the reader in Foster's masterful way. Foster's detailed pen and ink drawings are fresh and appealing, and her illustrated timelines give a clear sense of chronology, enriching the engaging text.  This book is an excellent resource for any study of the Renaissance and the Reformation. Written for grades 7 and up, but with appeal to a wide age range.