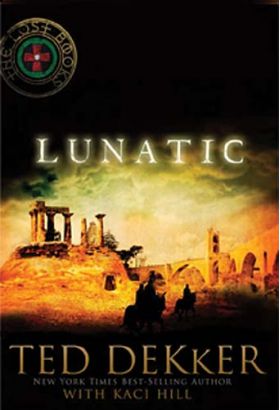 Lunatic is the fifth book in the Lost Books series for teens by Ted Dekker.

Separated by time and space, our heroes finally return home. But five years have passed and they find a nightmarishly changed world. The despised Horde are now in control. The healing lakes of Elyon are now blood red. And mighty Thomas Hunter and his Forest Guard have disappeared. Take a stand with the chosen but be wary, for not all is as it seems. Now the chosen themselves are questioning their very sanity. For the only way to win may be to lose. The only way to live may be to die. And the only one to lead may be a lunatic.

Lunatic is set in the middle of Dekker's Circle Series.  The Lost Books series does stand alone, but it does introduce characters from the Circle Series. Your teens will be on the edge of their seat (and you'll enjoy it too!). Soft cover.