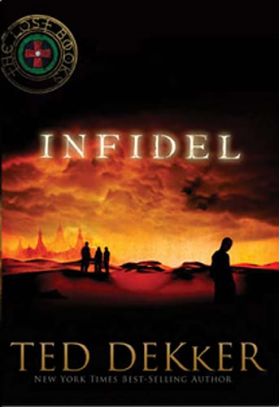 Infidel is the second book in the Lost Books series for teens by Ted Dekker.

From Chosen to Traitor?

After being stretched to their limits, the four heroic young Forest Guard recruits--Johnis, Silvie, Billos, and Darsal--are pulled into deeper danger on their mission to secure the seven lost Books of History.

Celebrated as a hero, Johnis's world is shattered when he learns that his mother may not be dead as presumed but could be living as a slave to the Horde. Throwing caution to the wind, he rushes to her rescue.

But this is precisely what the Horde has planned. Now he will face a choice between Silvie, whom he is quickly falling for, and his sworn duty to protect the Forest Dwellers. How can he save those he loves without betraying his own people?

In the end, one will be revealed as the Infidel. And nothing will be the same for the remaining Chosen.

Infidel is set in the middle of Dekker's Circle Series (namely, these stories fall between Black and Red).  The series does stand alone, but it does introduce characters from the Circle Series. Your teens will be on the edge of their seat (and you'll enjoy it too!). Soft cover.