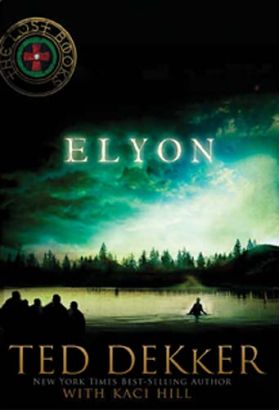 Elyon is the sixth book in the Lost Books series for teens by Ted Dekker.

Elyon's lakes have turned blood red. Is it a curse . . . or the cure? Shaeda has one blue eye and one purple eye. No one fully knows her story, but her mere gaze eats away at the core of one's being. In his quest for power, Johnis now finds himself in her intoxicating grip. Assumed identities, a magic amulet, the fearsome Shataiki bats, and a troubling alliance with the Dark Priest all converge against the three remaining chosen. Only Elyon knows what will happen when the forces of ultimate good and evil clash in their final battle. Dive deep with them in this epic conclusion to the Lost Novels--if you dare!

Elyon is set in the middle of Dekker's Circle Series.  The series does stand alone, but it does introduce characters from the Circle Series. Your teens will be on the edge of their seat (and you'll enjoy it too!). Soft cover.