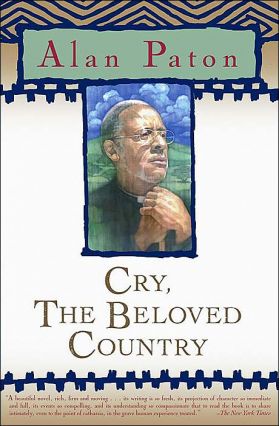 "Cry, the Beloved Country" is a beautifully told and profoundly compassionate story of the Zulu pastor Stephen Kumalo and his son Absalom, set in the troubled and changing South Africa of the 1940s.

The book is written with such keen empathy and understanding that to read it is to share fully in the gravity of the characters' situations. It both touches your heart deeply and inspires a renewed faith in the dignity of mankind. "Cry, the Beloved Country" is a classic tale, passionately African, timeless and universal, and beyond all, selfless.

An Oprah Book Club selection, "Cry, the Beloved Country," the most famous and important novel in South Africa's history, was an immediate worldwide bestseller in 1948. Alan Paton's impassioned novel about a black man's country under white man's law is a work of searing beauty.

Remarkable for its lyricism, unforgettable for character and incident, "Cry, the Beloved Country" is a classic work of love and hope, courage and endurance, born of the dignity of man.

Author Alan Paton, a native son of South Africa, was born in Pietermaritzburg, in the province of Natal, in 1903. While his mother was a third-generation South African, his father was a Scots Presbyterian who arrived in South Africa just before the Boer War.
Alan Paton attended college in Pietermaritzburg where he studied science and wrote poetry in his off-hours. After graduating, he wrote two novels and then promptly destroyed them. He devoted himself to writing poetry once again, and later, in his middle years, he wrote serious essays for liberal South African magazines, much the same way his character, Arthur Jarvis, does in "Cry, the Beloved Country".
Paton's initial career was spent teaching in schools for the sons of rich, white South Africans, But at thirty, when he was teaching in Pietermaritzburg, he suffered a severe attack of enteric fever, and in the time he had to reflect upon his life, he decided that he did not want to spend his life teaching the sons of the rich.
Paton was a great admirer of Hofmeyr, a man who dared to tell his fellow Afrikaners that they must give up "thinking with the blood," and "maintain the essential value of human personality as something independent of race or color." Paton wrote to Hofmeyr and asked him for a job. To his surprise, he was offered a job as principal of Diepkloof Reformatory, a huge prison school for delinquent black boys, on the edge of Johannesburg. It was a penitentiary, with barbed wire and barred cells, and under Hofmeyr's inspiring leadership, Paton transformed it. Geraniums replaced the barbed wire, the bars were torn down, and soon the feeling in the place changed.
He worked at Diepkloof for ten years, and though it was certainly a fertile period, at the end of it Paton felt so strongly that he needed a change, that he sold his life insurance policies to finance a prison-study trip that took him to Scandinavia, England, and the United States. It was during this time that he unexpectedly wrote his first published novel, "Cry, the Beloved Country". It was in Norway that he began it, after a friendly stranger had taken him to see the rose window in the cathedral of Trondheim by torchlight, Paton, no doubt inspired, sat down in his hotel room and wrote the whole first chapter. He had no idea what the rest of the story would be, but it formed itself while he traveled. Parts were written in Stockholm, Trondheim, Oslo, London, and the United States. It was finished in San Francisco. "Cry, the Beloved Country" was first published in 1948 by Charles Scribner's Sons. It stands as the single most important novel in South African literature.
Alan Paton died in 1988 in South Africa.