My sister and I had a wonderful conversation today about parenting boys.  She has 5 sons, I have 7.  Between the two of us, that’s an aweful lot of male testosterone!  Both of us agree that for the most part, boys are weird (odd might be a better description), and proud of it.  So from a couple of moms with a pile of boys (literally – they’re most often in a wriggling dog-pile wrestling match 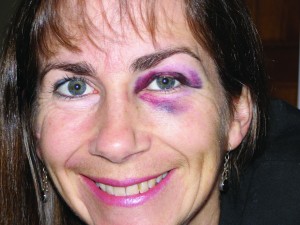 ), our best advice to you boils down to this:

Learn to enjoy what they enjoy.

I know, I know.  Burping contests and armpit farts will never be your cup of tea – and I agree.  However, I would truly encourage you to enjoy your boys and be interested in what interests them.  You may never be a paintball queen, but that’s not the point.  Relationship is never about “me.” Relationship is about giving 100% (not 50-50) to the person you love.  In this case, that person is your son.

Today my sister related how she’s learning to play Halo on Xbox.  As far as she’s concerned, it’s a waste of time, and she doesn’t enjoy it; but she loves her son, so she plays and laughs with him.  She totally lacks the coordination required to successfully operate the little characters on Halo, so she’s constantly defeated – but the boys love it, and they love her for it.  They’re bigger and tougher than their mom, and they’re proud of it.  Her sons’ friends think she’s amazing (“Like, wow, like your mom plays Halo???  Cool!”), and her sons enjoy having such a ‘cool’ mom.  And all it took was occasionally playing Halo.  She does it for them.  She loves them.  She enters their world.  Such a small price to pay!

Over the past 27 years of raising boys (3 still living at home), I’ve been taught how to ride a dirt bike (I failed, and flipped it – and they thought it was hilarious, but cool), a 3-wheeler (again I failed, and flipped it – and now they think it’s hysterical), and a motorcycle (I refused to drive it myself, but rode behind my son).  I was even taught how to do flips on the trampoline. The photo insert shows you the success of that endeavor -but, hey, how many guys have a mom with a black eye? Pretty cool.  Oooh, and the stories they told: “My mom can beat your mom up…and I have the proof!” (Having a mom that can beat up other moms is somehow admirable.  Don’t ask me why.)

My husband took our 4 oldest sons to their hunter safety course.  When the fifth one wanted to go, my husband’s work hours wouldn’t permit him to do it…so, I took hunter safety with my son.  I do not EVER plan to shoot Bambi, but I learned all about guns and bullets and stuff (BORING).  Stephen has, on numerous occasions, thrown out that little bit of trivia to his friends, “Your dad did hunter safety with you?  That’s nothin’!  My MOM did it with me.  Yeah, she totes a gun.  She can shoot (though it always knocks her over)…Guffaw!”

I remember when some of my sons were really getting into Christian punk rock.  We had high standards (no rock), but despite our best attempts, it made its way into our home.  We fought it and fought it.  My sons (bless them) studied it out themselves and challenged our beliefs.  We reluctantly entered their world, allowed them to start a garage band at our house and accompanied them to their concerts.  We decided to be their greatest fans, because we had to agree that we were being legalistic rather than biblical.  Once I even got in a mosh pit (never again).  They worked hard to be a “good” witness to a rough crowd, and I have no doubt, seeing their faith, that God was pleased and glorified.  As they grew older, every one of them moved on, maturing in their music tastes (2 of them are now worship leaders), but they don’t forget the years that we bought them the drums and guitars, allowed them to practice at our house, and entered their world (knowing how hard it was for us).

Just this week, my 15 year old has been trying to teach me how to rip-stick (a skate board with a joint in the middle).  For some reason, when I get on, it only goes one direction: backward.  He roars with laughter and enjoys my humiliation – then demonstrates all the proper technique (puffed up and proud that HE can and I can’t do it).  I try it again, and again go backwards.  He’s already told me he’s not letting me give up (he enjoys laughing at me too much).  I really don’t enjoy being humiliated and have no desire to learn to rip-stick, but I love my son and want to spend time with him doing what he enjoys.  So, maybe tomorrow I’ll make him show me again.  Maybe I’ll surprise him and actually master it.  And word is getting out:  “My mom rip-sticks…backwards!”

So, ladies, why don’t you, right now, leave the computer and make yourself join your son.  Build a cooler lego vehicle than he built.  Sled down the hill just once.  Shoot him with some airsoft pellets.  Start a rubberband  war.  Drink an entire Monster energy drink (Ew.  Yuck.) Belch like you mean it.  Once you’ve entered his world, then you can actually open dialogue and talk with him.  If you enter his world, he’ll actually hear you when you talk.  You’ll never regret it, ladies.  You go, girl!

We’d love to hear your ideas:  how did you enter your son’s world today?  I’ll keep you posted on how my rip-sticking is coming along.

It’s been a grueling, but satisfying homeschool day.  School is finally finished when you suddenly realize it’s 5:00 – and you totally forgot about dinner.  Nothing is thawed.  Nothing is cooking.  Now what do you do?!  One of the biggest challenges we homeschool moms face is finding time to cook.  I’m always on the lookout for easy, nutritious meals, and always forgetting to plan ahead.  Here are a few easy ideas to get you going.

In the end, if you suddenly realize it’s 5:00, and you totally forgot dinner, it’s no big deal!  Here are some instant-meal ideas.

Sisters, in the end, remember this is one of the most challenging seasons of life that you will walk through.  “Little” things like meal prep can seem huge at the time, but you can rest assured that your kids will live to adulthood while eating leftovers, cereal, and pre-frozen meals.   Teach your kids to cook, and count it as school.  Utilize their help – even if it’s not exactly to your standards. (I guarantee it won’t be to your standards…but they’ll learn!)

And finally, don’t be anxious.  Learn to laugh over those “oops!” moments when you forget to get a meal started. (Oops!  It’s 5:30 right now as I type this!  I had no idea it was so late!  I need to get dinner started!)  Rest in God’s infinite love for you, take a deep breath, and go joyfully make whatever you have at hand. And now, please excuse me while I go make dinner.

Just What You Need