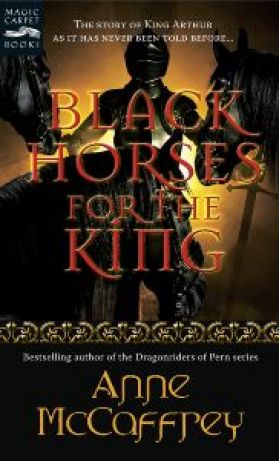 Black Horses for the King by Anne McCaffrey

The story of King Arthur as it has never been told before. Galwyn, the son of a bankrupt and dishonored aristocrat, has always had an ear for languages. So when Lord Artos--later known as King Arthur--needs an interpreter to help him buy large horses to breed a troop strong enough to carry armed warriors against the Saxon invaders, Galwyn gets a chance to redeem his father's honor and make a name for himself. "This fast-moving historical fantasy by bestselling author Anne McCaffrey traces the beginnings of the British cavalry, as recounted by a boy growing up in exciting and perilous times. After his father's death, young Galwyn Varianus is apprenticed to his uncle, who puts the boy to work on the high seas. But horses, not ships, are Galwyn's passion. Luckily, a passenger aboard, Lord Artos (later to rule as the legendary King Arthur), is bound for the great horse fair at Septimania. Risking his life, Galwyn abandons his uncle to serve the gallant leader. Galywn's calming way with horses quickly impresses Lord Artos and his men. But what no one expects is how crucial Galwyn will be to their upcoming battles--as he masters the secrets of the iron shoes that will protect the exotic horses' delicate hooves. . . ."

"The Arthurian flavor is well maintained throughout, and both characterizations and events are totally convincing." --"Booklist

"McCaffrey's unromanticized portrait of the times is full of muck and grit, and horse lovers and fans of historical fiction will find much to enjoy in the details."
"--Library Journal

"The wonderful horse lore, the great and charismatic figure of Arthur, and the sympathetic hero all come together to make an engrossing and realistic Arthurian novel."--"The Horn Book"