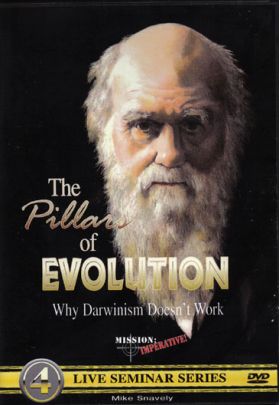 #4 The Pillars of Evolution: Why Darwinism Doesn't Work

A theory is a set of organized statements which attempt to explain something.  Darwinian evolution is a scientific theory.  That’s because it’s falsifiable.  In other words, it can be critiqued; observations can be made and conclusions drawn – based, of course, on the accepted rules of the scientific process.  Any science theory must be tested, and the rules of the test phase are that it must be demonstrable, observable, and repeatable.

If the existence of God who created complex life is not acceptable, then a purely naturalistic explanation must be found. This explanation must include all of the basic “turning points”, or key elements of the theory, and if it’s called a “scientific theory”, it must be validated by the rules of the scientific process.  The problem with Darwinian theory is that it has been around for a very long time, and the core aspects of the theory have been widely put to the test – and found greatly wanting!

This session illustrates in plain, easy-to-understand language, why evolution is based on faith, rather than being validated by the scientific process.  In fact, the very elements that are used to supposedly show how evolution works actually show the opposite.  Darwinian evolution asserts that huge amounts of information have been added to genetic codes over time, when in fact the exact opposite is observed to be happening!